My friend persuaded me to get up at 8 o’clock in the morning, as we have many plans and places to visit for today. After the traditional morning coffee which we brought from Kiev and which came to end rapidly, we left the hotel.

Our first destination was Umaid Bhavan Palace, situated on the hill in 4 km from our hotel. We wanted to catch tuk tuk for 50 Rupee to get there. Catching tuk tuk in India is easy enough,  we found tuk tuk immediately after we went out from the hotel. After a little haggling, driver agreed to take us to the palace for 60 rupees. But when we reached the palace it turned out that driver didn’t have a change, so he took only 50 Rupees for the riding. 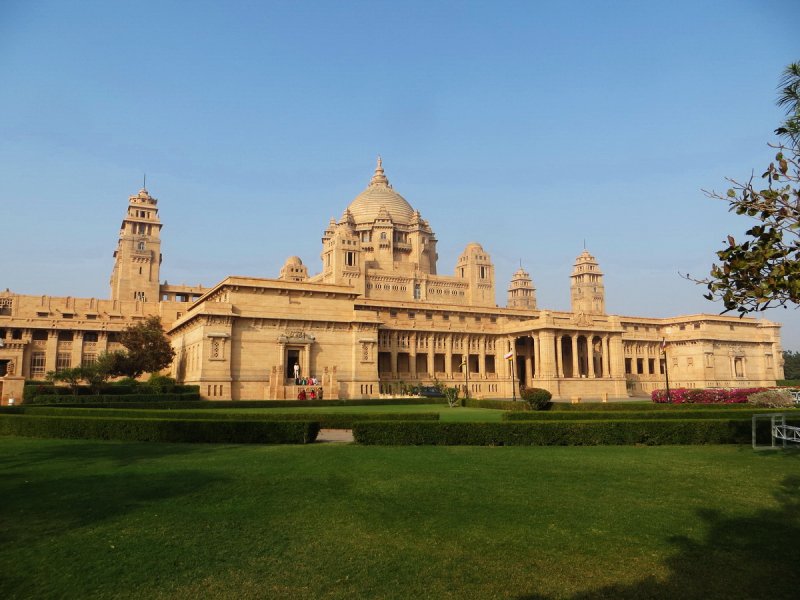 Building of the Umaid Bhavan Palace began in 1929 by Maharaja Umaid Singh, and was finished by 1943. This palace is one of the largest private residence in the world, with 347 rooms. Now it is divided into three parts - one is occupied by luxury Taj Palace Hotel, another part is used as a residence by  royal family and third part is opened for public. As a foreigner we should pay 100 Rupee to enter the palace territory. 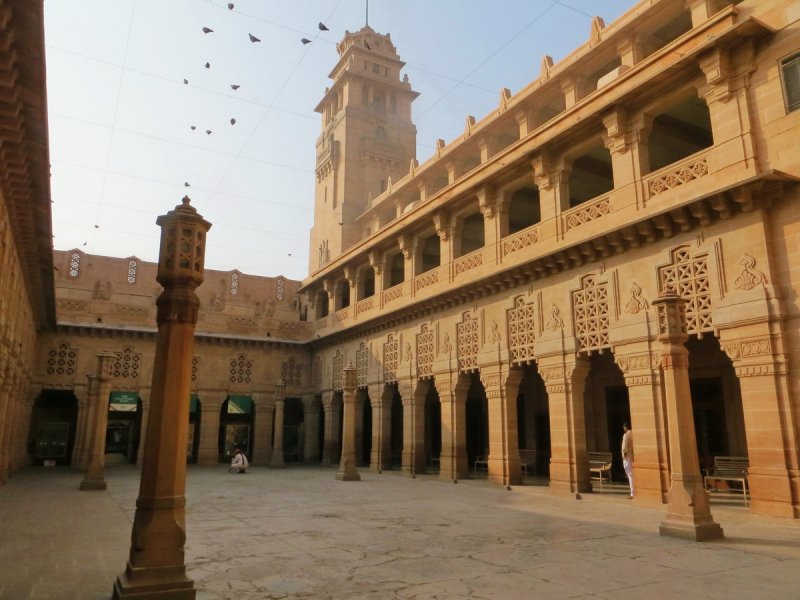 There is a small museum inside the palace, where you can see some pictures of Maharaja and his family. There is an exhibition of tableware, bathroom furniture, weapon. Overall we didn’t like the museum much, as it is small and not very interesting.

Almost all territory is closed for visitors so there is nothing to do there except the museum. A little bit disappointed we were ready to leave the palace, but suddenly just before the exit, my friend saw the signpost to the Museum of old cars. 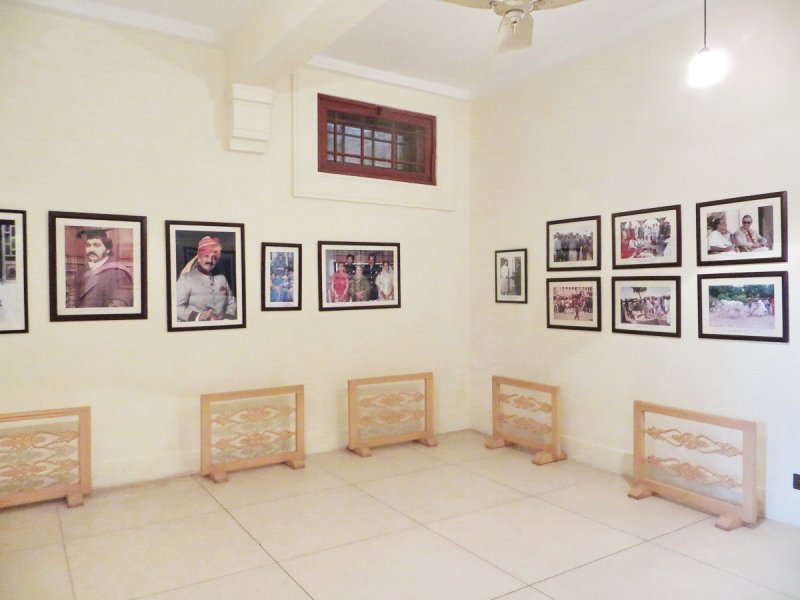 We followed the sign and found the exhibition of old cars of Maharaja. It was really worth to see. There were luxury Rolls Royce of 1927 year, and Cadillac and Buick, the worst and cheapest car was Mercedes Benz.

After that we continued to realize our plans and went to the bus station that turned out to be further than we expected. We were going to buy tickets to Ranakpur for tomorrow morning, but man in the counter said that tickets are not available for selling today. We could buy tickets 15 minutes before bus departure… 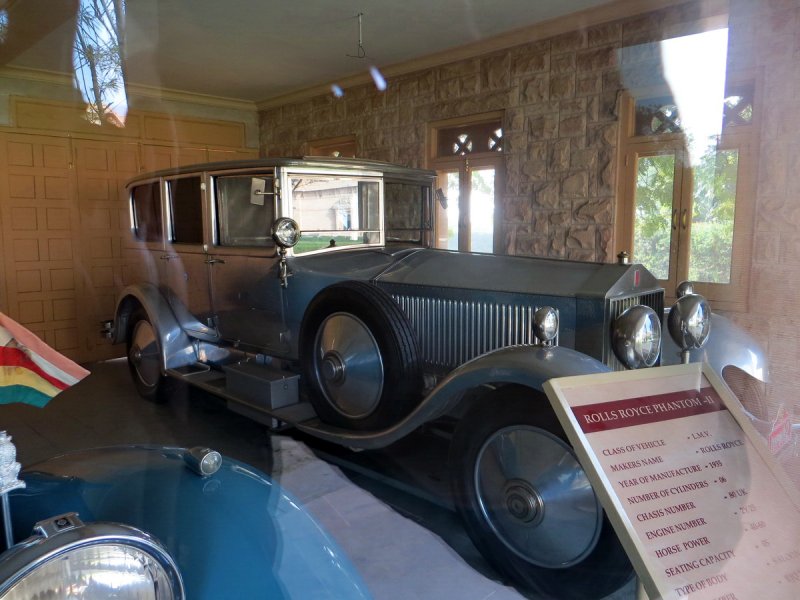 Our next destination was famous Mehrangarh Fort. We wanted to reach it by tuk tuk as it was situated rather far away from bus station. So we started to haggle with drivers that all as one asked for 100 Rupee. Finally, young boy admitted our price of 50 Rupees and we went to the fort with comfort. 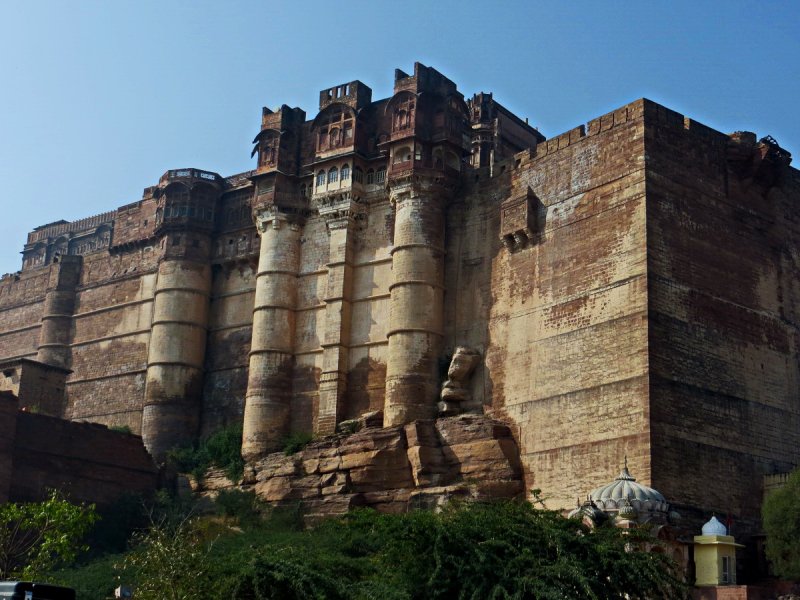 Enter fee to the Mehrangarh Fort is expensive and costs 400 Rupee per foreigner including audio guide, but excluding photo camera. We liked the fort a lot and spent there several hours. It is really very big and impressive. 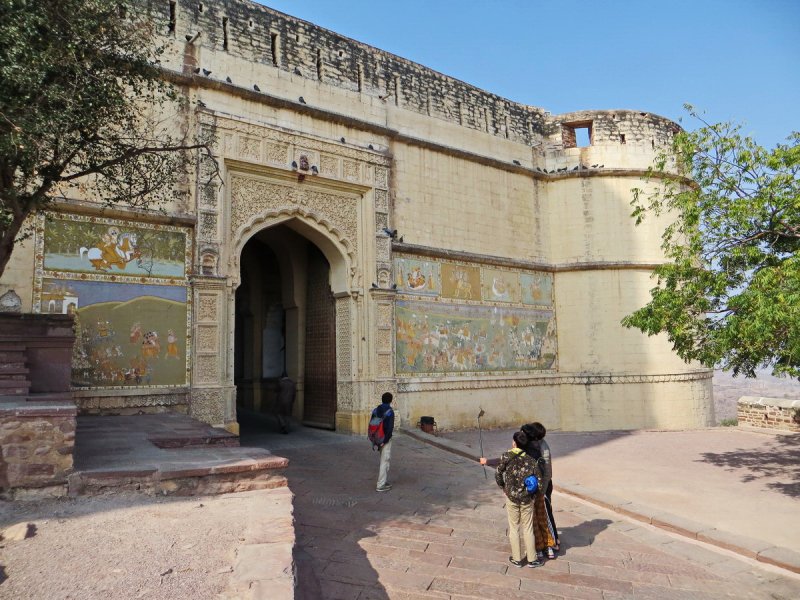 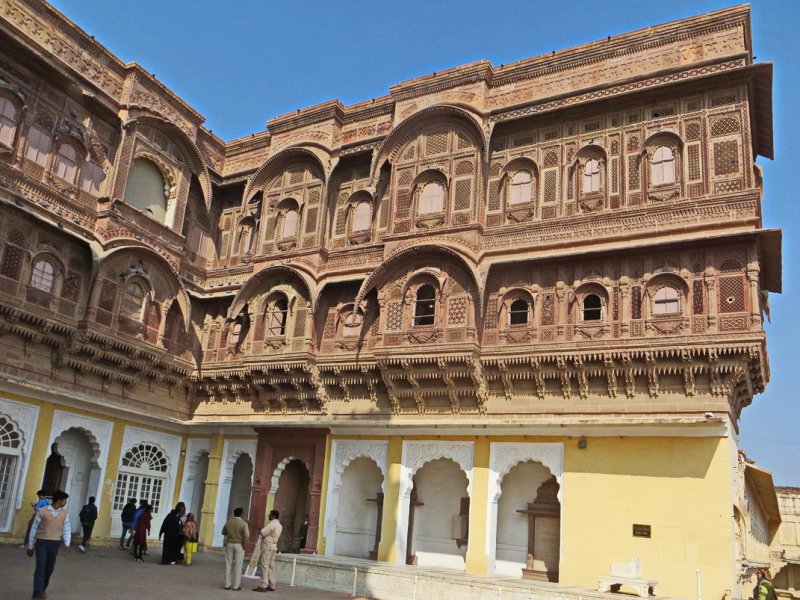 There a lot of different exhibitions, you will find room with palanquins, room with seats for riding elephants, covered with gold and silver embossed sheets. Room with traditional marwar paintings, room that displays collection of weapon such as swords decorated with ivory, emeralds and pearls.

There is a room of love with beautifully painted walls and stained-glass windows. Room where maharaja met with important guests (audio guide told that there is a secret room behind the wall where sometimes  maharaja’s wife sat and heard all that was discussed to help maharaja make the decision). 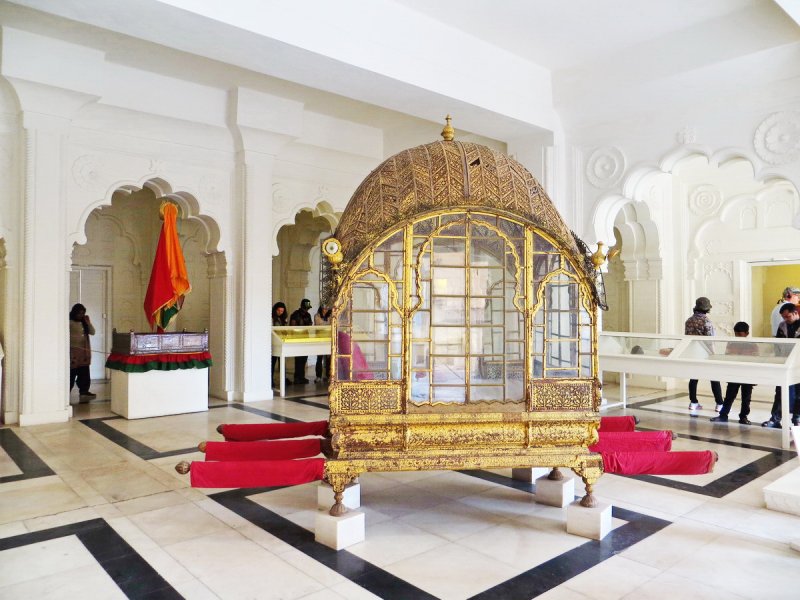 There is a beautiful courtyard  where all wives gathered and spent their time together. All walls inside the fort are decorated with carvings and balconies. It so nice, it feels like you find yourself in fairy tail palace. Some walls are red and audio guide told that this is a natural color of the stone. 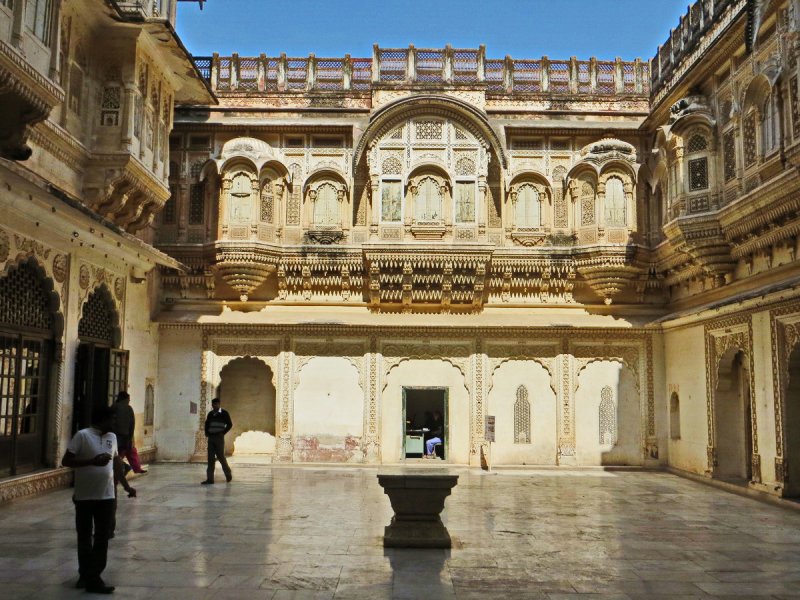 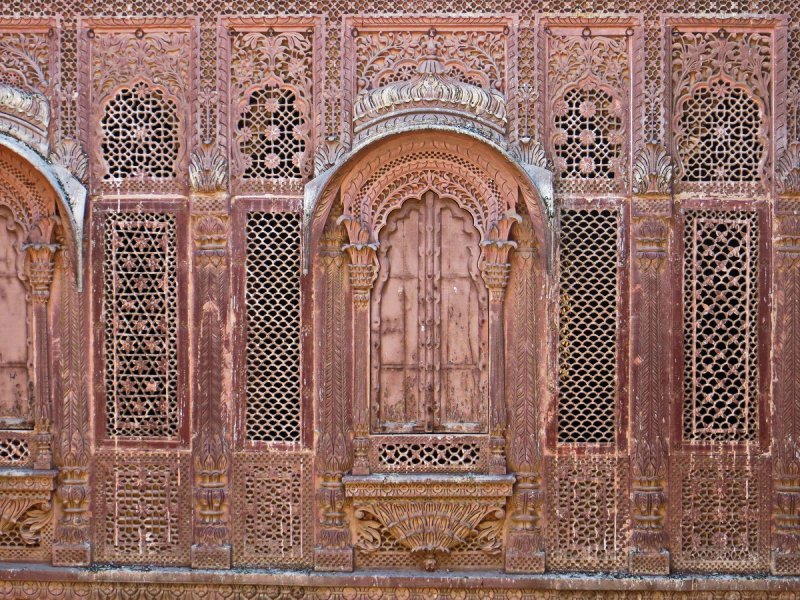 We enjoyed breathtaking views of the city from the fort. Jodhpur is called blue city for its old center with blue colored houses (although we saw the same blue houses all over Rajasthan). Many years ago only Brahmins were allowed to paint their houses in blue. According to the audio guide, blue helps from insects and preserve coolness during hot days . 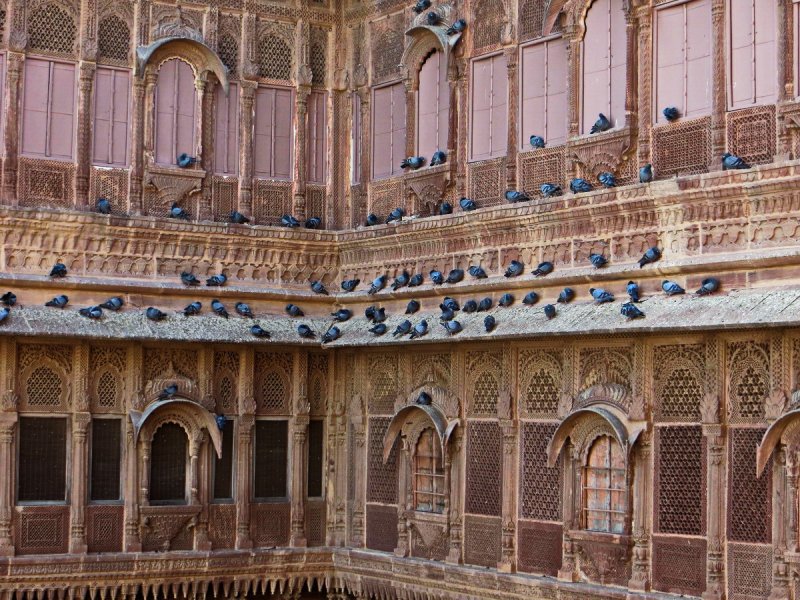 We were significantly tired and hungry while walking around Mehrangarh fort. It appeared to be really huge. There is cafe in the fort with high prices so we went out from the fort and by narrow street we began to descend to the town center. 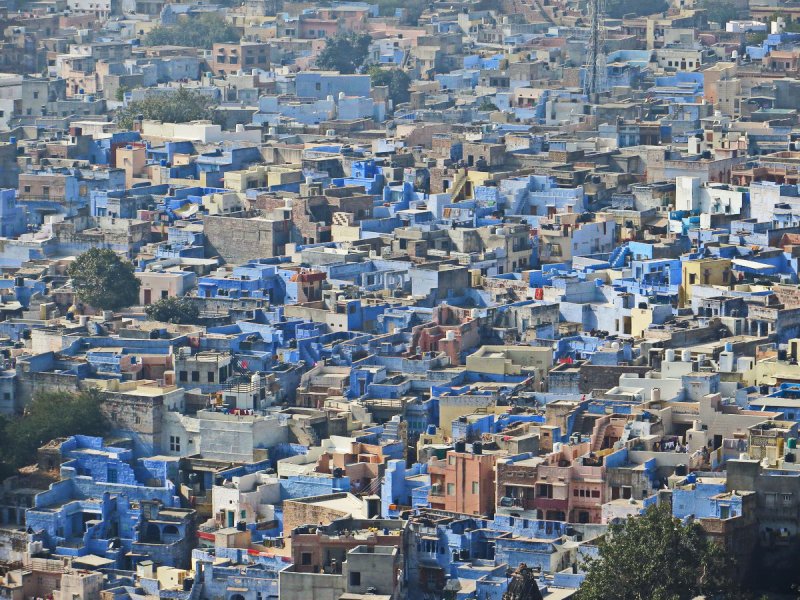 We found ourselves in the center of market with vegetables, spices, clothes, everything except something tasty to eat. We continued walking aimlessly in the net of narrow streets and finally went out to the very noisy and overcrowded but still very narrow street that served as a market for indians. We have hardly made our way through the crowds of people, scooters, cows and cars.

Yeah, it is exactly that feeling.

Still very tired and hungry we’d almost lost the last hope to find something to eat in this crazy blue town, but finally we saw fried patties in a large pan, and Indians who crowded around the stall. It was the right place. 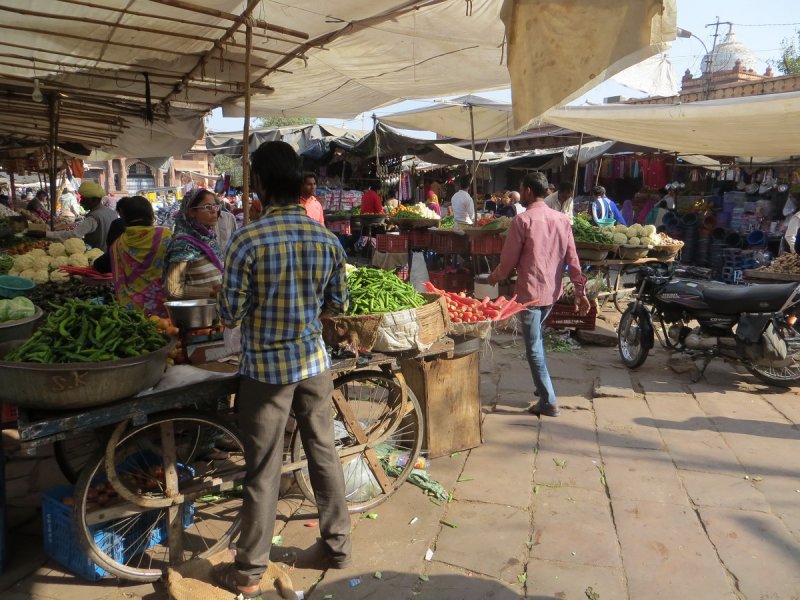 We paid for two samosa and happily sat down right there on the stairs of the nearest shop, choosing the purest one. Samosas were very tasty but hot. We bought two masala tea in the tea shop nearby and continued to explore the town. Center of the blue town Jodhpur did not seem very remarkable. It seemed  much more exciting from the top of the fort. There are many blue houses all of the same type. After a while we decided to come back home. We catched a tuk tuk for 20 Rupees to take us to the supermarket not far away from the railway station. There was nothing interesting in the supermarket. We were surprised by high prices for tea (100 grams for 50 rupees = 12 USD). Situation with coffee was even worse - nay we found normal ground coffee, there was only instant nescafe for the transcendental prices (100 grams of instant Nescafe = 100 rupees).

Again we catched tuk tuk to come back home. We had a dinner at the same place, eating masala dosa again. On the way home we bought small snickers that made me very happy.

My friend commented:
-  I have never seen the grown woman so glad with a small snickers.
​
We drank a tea with small snickers in the hotel room and decided to go to bed earlier but suddenly a group of loud indians from old to young settled down in the hotel. We asked them to behave more quietly. They calmed down a little bit and around 23 o'clock went to bed too. 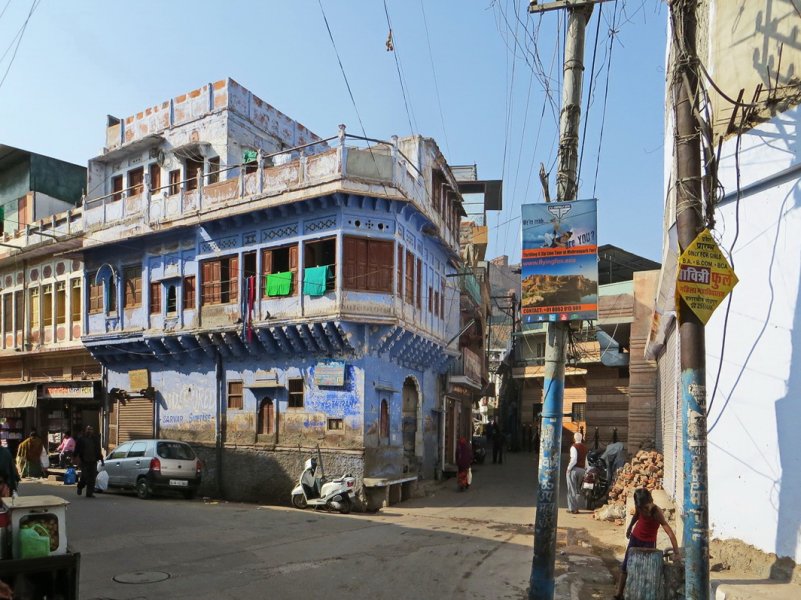