We woke up early in the morning today as we were going to reach Ranakpur by bus. We check our from the hotel, catch tuk tuk right on the vibrant road not far away from the hotel. My friend, who became almost an expert in talking with tuk tuk’s drivers agreed on 50 Rupee price to take us to bus station. Very quickly we rode to the bus station, it was only  7 o’clock and bus to Ranakpur departure at 8 oclock. Man in the ticket office said that tickets are sold only 15 minutes prior departure, so we have a time to walk around the station, drink masala tea.

Finally at 7.45 we bought tickets (for 274 Rupee both), found out which of the buses will go to Ranakpur, and took our places. Actually there were no places on the tickets. But the bus was empty so we sat down where we want. Bus was rather comfortable. It was rather cold this morning, driver didn’t close the door and cold wind swept inside the bus. But after an hour sun became to warm us and driver finally closed the door.

Soon, we drove into the toll road. I was surprised to see something similar to Europe highways here in India. There were cabins and barriers before road entrance.

After a while we continued moving on the dusty country road.

I had the feeling as if we were back on 10 years ago, when we traveled around Ukraine by buses and trains. The landscape outside the window was sometimes almost Ukrainian.

It was nice and quiet. Different Hindus came in and out the bus,  men with beautiful red turbans, girls, wrapped in transparent colored shawls, old woman with a round earring in nose, which hid the money in a bundle of shawls.

It seemed to me that I have become part of this world, I felt some contentment and joy.

Just causeless joy, not because of something specific, but just because of the sun is shining, and my beloved friend is here with me in this strange country far far away from our homes, and everything seems half a fairy tale half a true story. 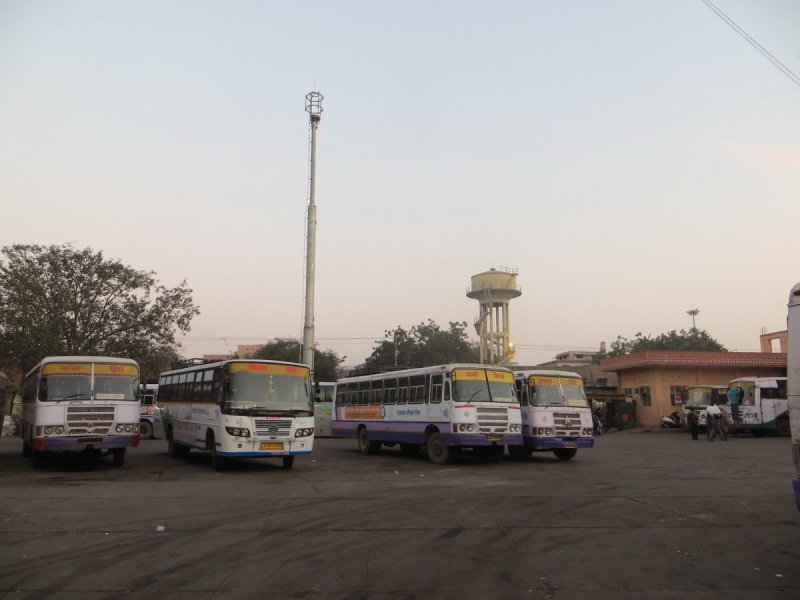 The bus stopped just in front of  the entrance to the temple. Immediately after we entered the temple territory, I saw a pointer to the dining room. We decided to find out what is a dining room in the temple. At the entrance to the dining room we took off  shoes and bought two tickets at 50 rupees per person for unlimited food. The staff showed us where to sit - on the bench at a long table. In a moment in front of us appeared flat iron bowl with rice, roti, fried cabbage and in smaller bowls  - sauce and gravy of lentils. Little fried indian bread called puri was very tasty - so I ate them while men carry new and new one. Cabbage was also good. It seems we were attacked by hunger in this wonderful canteen, as we ate and ate - much more our normal serving.

At the exit from the dining hall indian man asked us where we are from. He was very happy to know that we are from Ukraine. He asked for a help - he has some texts in Russian and want us to translate them.

So we agreed to help him, we sat down on a bench and a man brought a backpack full of various notebook.

It turned out that his name is Mr. Chohan and he does meditation, yoga and ayurveda. Notebooks were filled with gratitudes written by hand from different people from around the world, from Canada, Europe, Russia and Ukraine. Mr. Chohan asked us to translate some of the russian and ukraine text into English and choose some essential sentences from the text to publish them on the website and advertisement.

Reading the comments of different people it was hard to believe that I meet such a wonderful man. There were many comments that told the story about somebody came to India and was looking for a good teacher for a long time, and only Mr Chohan could finally help.

Mr Chohan first learns about your problems, both physical and mental. Many people wrote that Mr. Chohan himself guesses about their illness, without a hint. Then he offers individual therapy and yoga with meditation. Many wrote that the couple of days spent with Mr. Chohan dramatically improved their life.

When I asked what is a price for the consultation, Mr Chohan replied that he take 50 euros, though I did not understand what is this price for - just for consultation or for all together with yoga etc. As he told us, he began to take the money after he decided to open his ashram near Ranakpur.

We spent a couple of hours with Mr Chohan, he invited us to his ahram many times, promised to learn to cook chapati and feed us with a free dinner.But as usual when speaking with indian man I have that strange feeling inside me, as  I could not fully trust this man, although I saw a lot of really (?)  positive comments, and indeed Mr Chohan made a very good impression.

Later I thought about this man and me and how I perceived this situation.. I don’t know why I am so incredulous. Maybe it would be easy for me to believe Mr Chohan if my friend believe him - but I saw in his eyes the same mistrust as in mine…

So we said goodbye to each other and return to our exploration of Ranakpur. 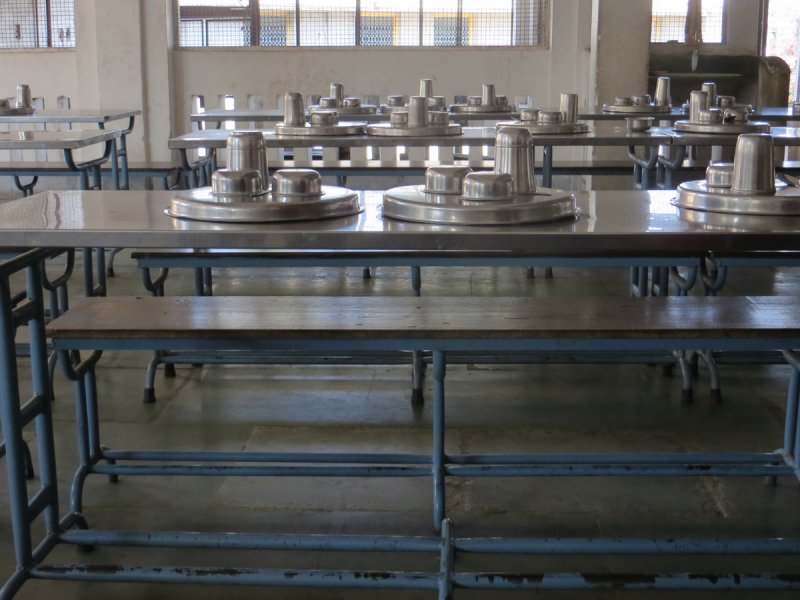 We read in Lonely Planet and in different other blogs that entrance to the Ranakpur temple is free. But it appeared that the entrance fee is 200 Rupee per person. It turned out that pushing indians decided to take money from tourists a year ago … So after a little bit of doubts whether or not to go, we decided that we should go, we bought two tickets (and as usual there is a separate ticket for photography that we have never bought and always take pictures for free). 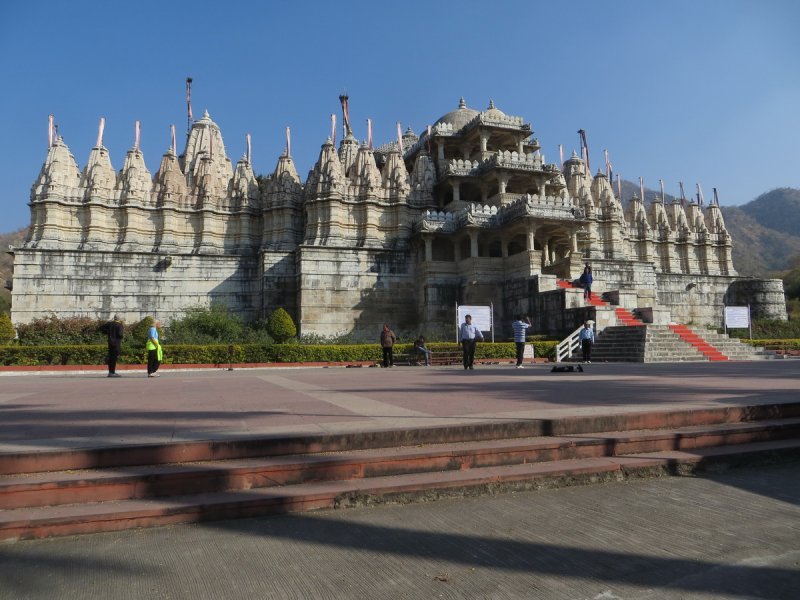 At the entrance to the temple there are guards who check the contents of the backpack. We were with two backpacks - they did not like the laptops in my backpack, and asked me to live the backpack in a paid luggage room, I was terribly outraged.

Not only that we paid the money for the entrance, but also we should pay for the backpack storage. This situation disappointed me a lot (but now when I am writing this I understand how foolish I behaved).

My friend calmed me down, took the laptop and went to the luggage room, although I was ready to go to the ticket office  and demand to return the money for tickets back.
- When we came here  we were so happy. And now you're so upset! If you believe in energy, Chohan drank your energy, - my friend said, when we finally entered the temple.
​    - Oh, it’s really strange, perhaps you're right. I lost a lot of energy while speaking to him for some reason. Maybe because I was talking in English all the time ... 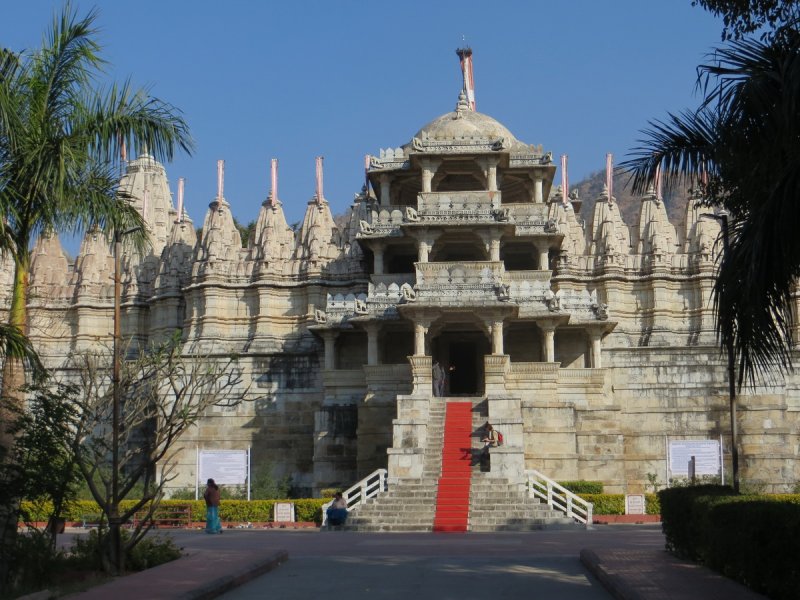 The temple is worth to pay and visit it. The ticket price includes an audio guide. And though I understood only around 60%, it was very interesting. Columns, ceilings, stone carving are so impressive. 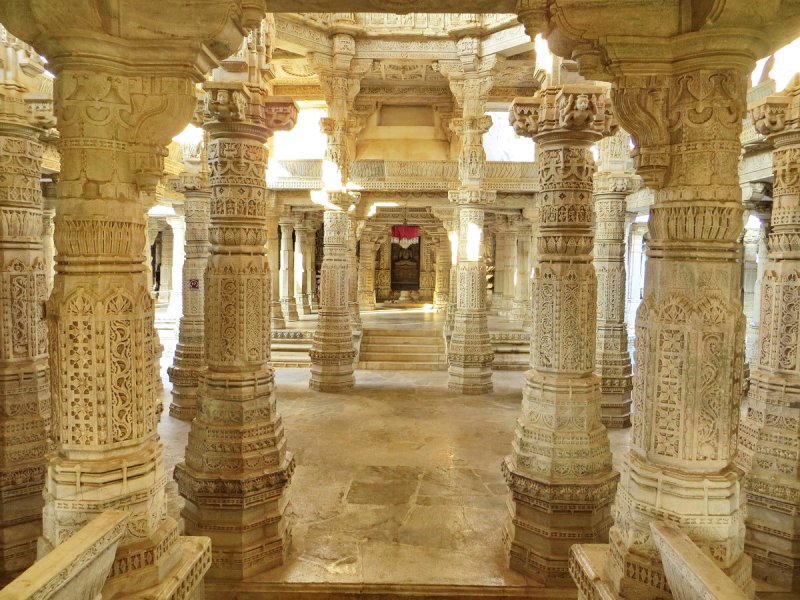 The temple itself is not very large, but we explore it for a long time, revealing more and more details. 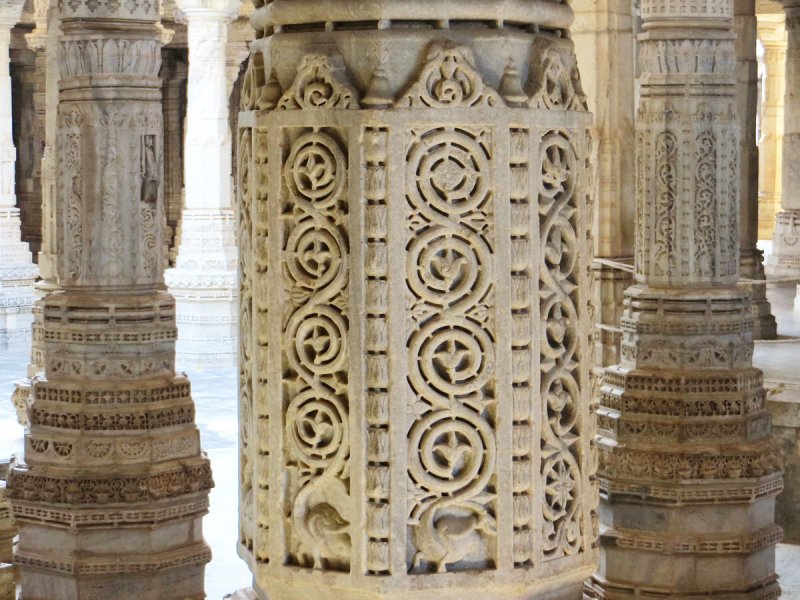 It took 50 years to build the Ranakpur temple, and construction began in 1459. Most of all I was surprised that after the building of the temple, he lasted only for 200 years. But then this land was conquered, people left it and the temple became abandoned. Bats, wild animals and snakes settled down in the temple. 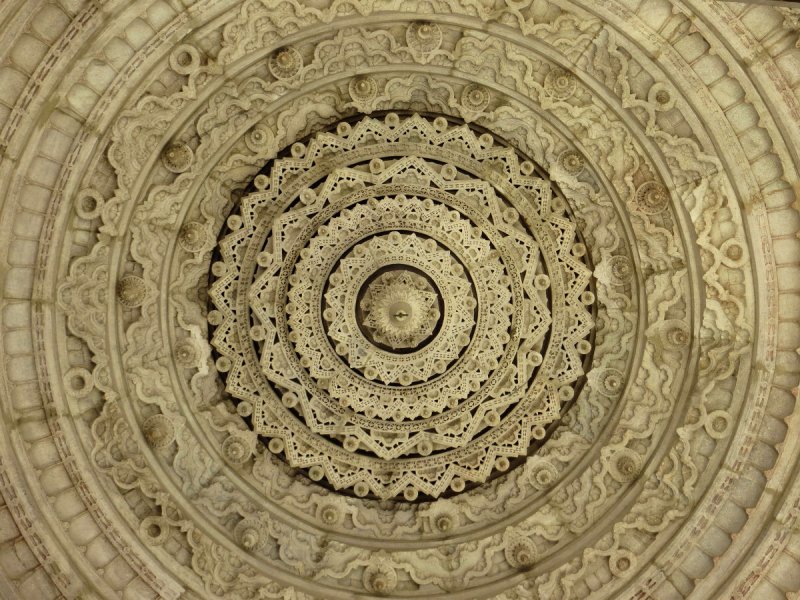 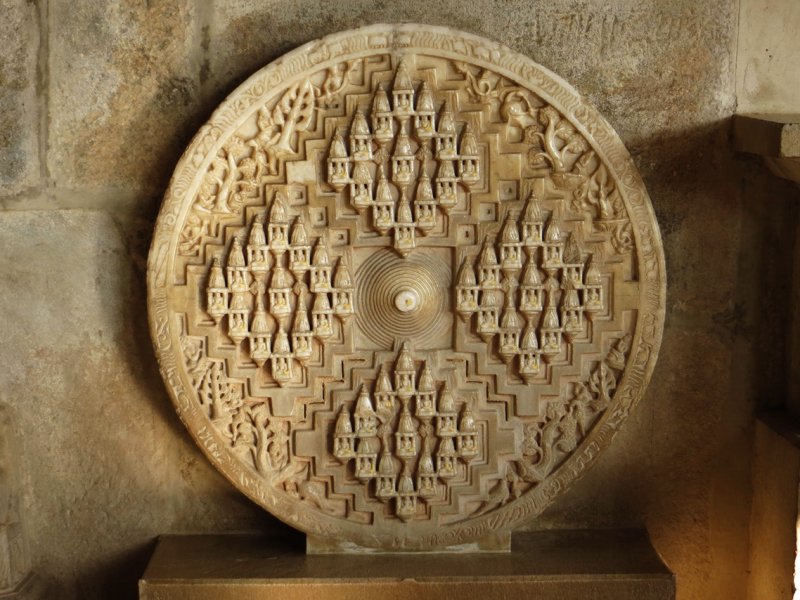 Many years passed while restoration of the temple began in 1991. It took 11 years to recover the former beauty of the temple. 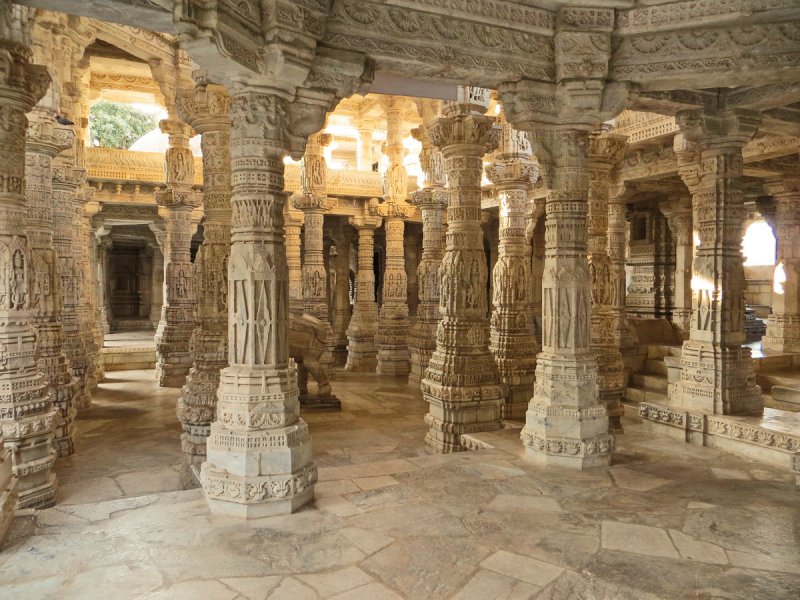 We booked the hotel in 2 km from the Ranakpur temple, so we decided to go on foot to the hotel. The road was very nice, quiet, there were trees full of monkeys and peacocks on both sides.

We liked the hotel, it has nice territory but the food in the restaurant seems expensive for us. 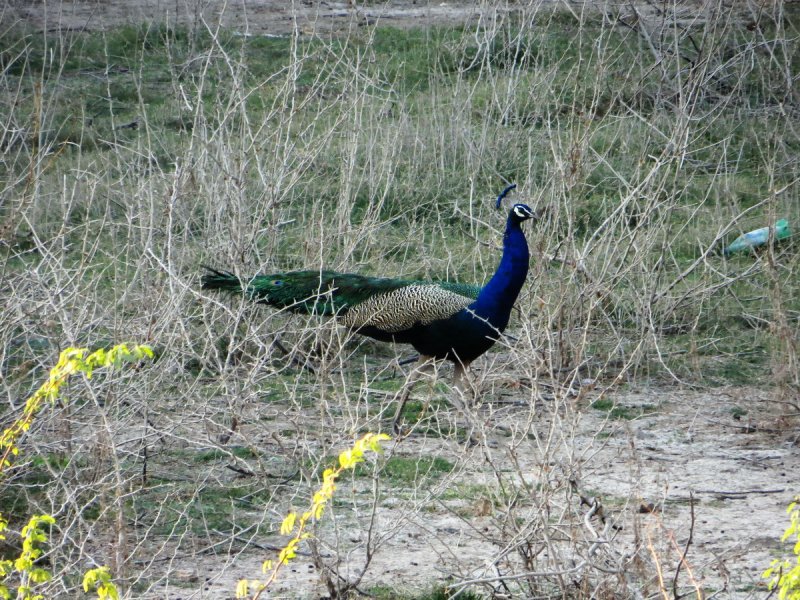