Today is a birthday of my friend, but the day turned out to be the worst since our arrival. There is not too much to talk about and there is even no photos of this day.

While we were waiting for the bus to Bhavnagar we found the small shop with different very attractive sweets. We bought some and I said it will be a torte.

We went to Bhavnagar for a long time, we arrived in the evening, the sun is almost hidden, and we didn’t have booked hotel (as there are a few in the booking.com and similar sites). Every time in such kind of situation I fill some helplessness - arriving in the evening in an unknown city, where nobody is waiting for you, even the most run-down hotel ... I don’t like such situations and become very hectic, although many travelers write they are used to search for the hotels on the site. So we went to find a hotel.

First hotel was Sun 'n' Shine, rather nice but expensive (2300 rupees per room). Than we saw a pointer to the Hotel Vijay Palace, and my friend suggested to have look at it. The hotel is located on the 2nd floor of the grim building. Indian woman at the reception informed us that there is one free room for the 800 rupees. The room was normal, newly renovated with new furniture. But the atmosphere was so-so, with noisy corridor full of indian men. We decided to go to see another hotels.

We got to the hotel Blue Hill with room for 1500 rupees. Near by Blue Hill there is another hotel - do not remember the name - a seemingly abandoned building in bad condition, but the doors were opened, and at there were two boys at the reception. When we asked for the room, they called their boss - a nice kind of man who knew the capital of Ukraine. He said that room will cost 600 rupees and  warned us that everything is very old - but we decided to take a look.

The room was terrible. Through the large windows covered with a layer of dust light hardly come in, paint on the walls swelled and sprinkle that what I have noticed for a couple of seconds. The second room was even worse, and we decided to run out of this godforsaken place. We decided to return to the Vijay Palace, but when we reached it woman at reception said that the last available room have just left.

However, when it seemed it was time to despair - woman said she could give us her room for the same price. We agreed. The room was right here, behind reception. Woman gave us clean sheets, blankets and towels. We bought bananas and some biscuits for dinner as there were no place to eat in the city of Bhavnagar....

So we celebrated the birthday of my friend - sitting in a strange hotel, watching movie about Mecca and eating Indian sweets… Tomorrow we will go to Palitana. 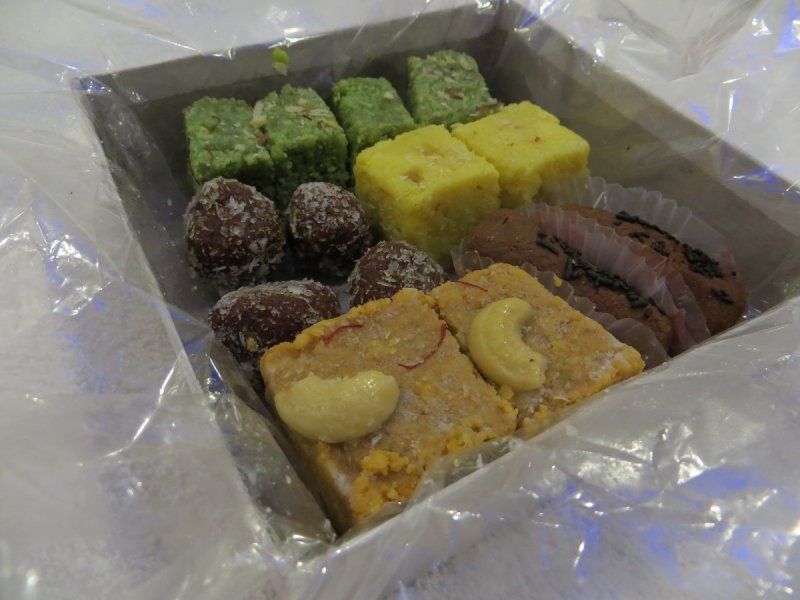