It’s hard for me to sleep in India because of  my very light sleep. There are many sounds in India even at night - either a dog barks, or someone sings a song. So I woke up several time during the night and each time it was difficult to fell asleep again.I decided to use an ear plugs next night. Because of a sleepless night, it was hard for me to wake up at 8 am.

Using our portable water boiler we made a coffee and after breakfast we packed up and went to rent a scooter, which we booked yesterday not far from our hotel.

We forgot our driving license in Ukraine, but owner of the scooter assured us that there is no police and even if we meet some policeman we wouldn’t have problems. So we believe him and decided to take a chance.

Thar Desert and Sam Dunes
One of the main attraction in Jaisalmer is visiting Thar Desert and camel safari. All hotels  and travel agencies in Jaisalmer offer you different kinds of trips, among which the most popular is one night/two days trip that usually starts in the morning with camel riding during the day and sleeping in the desert camp with dinner near the fireplace. People come to the desert not only to ride camels but also to see the sand dunes, among which Sam dunes is the most well-known.
It is situated 2km from Sam village and in 42 km from Jaisalmer. You can easily reach Sam dunes by car or by bike, the road is good there. Thar desert and particularly Sam dunes are not typical desert and dunes as you may draw in your imagination. There are trees and unfortunately garbage everywhere, not only sand for miles and miles. But still it is a great experience.
Our hotel offer us a one night/two days trip with camel safari and visit Sam Dunes for 1600 Rupee per person including everything you might need during the trip (water, breakfast, lunch, dinner, english speaking guide, place in tent and warm blankets for the cool desert evening) but we decided to rent a scooter for 500 Rupee and explore Thar Desert on our own.

So we gave the owner of the scooter nice laminated copy of our passport prepared for such situation in Ukraine (we were afraid to leave original passport and the owner either didn’t mind to take the fake one or didn’t guess that this is not original passport).

Scooter was rather good, new and comfortable.

For a start we stopped off at the gas station and filled a full tank of gasoline (that costs 60 Rupee = 1 USD  per liter).
As it turned out later you can buy gasoline in Sam village in plastic bottles. 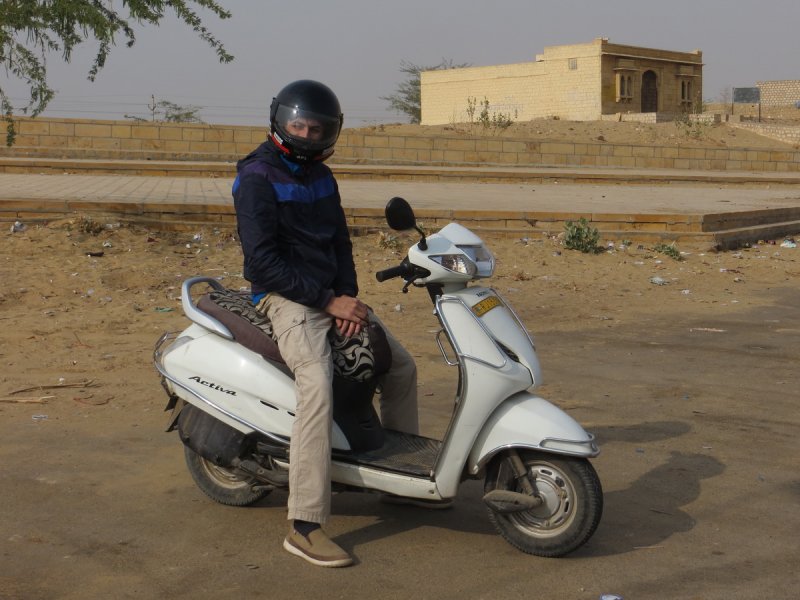 After that we hit the road towards Sam Dunes. Desert began just after we went out from the Jaisalmer. There were nothing around us but sand.

Road itself was quite good, wide, with fine paving without holes. There were few vehicle on the road. Weather was not very good, the sky was overcast and it became colder than yesterday. We took jacket and fleece jacket with us and it was very clever decision as it usually feels much colder when riding a scooter then just walking.

We should drive 42 kilometers until we will reach the dunes, it seems that it is a short distance, but when riding a scooter it turns out to be a long one, even though we ride 50-60 km per hour. 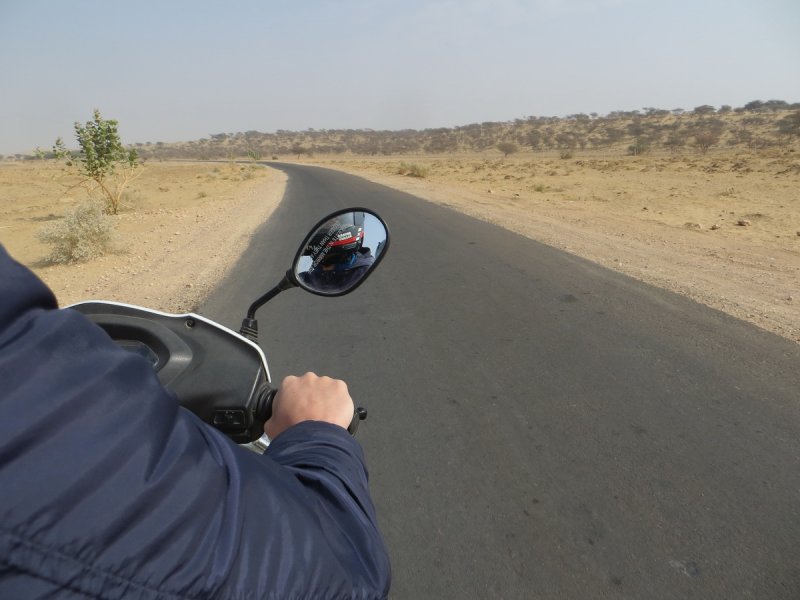 It is written in the internet that 200 years ago, the village flourished, though paying exorbitant taxes to Jaisalmer city. But one day the evil and powerful prime-minister of Jaisalmer put an eye on the elder’s daughter. There was no choice for that girl and her family, so they should come to decision in one day. So, in one night, all the villagers had left their settlement in protest. Nobody knows where they have gone till nowadays.... 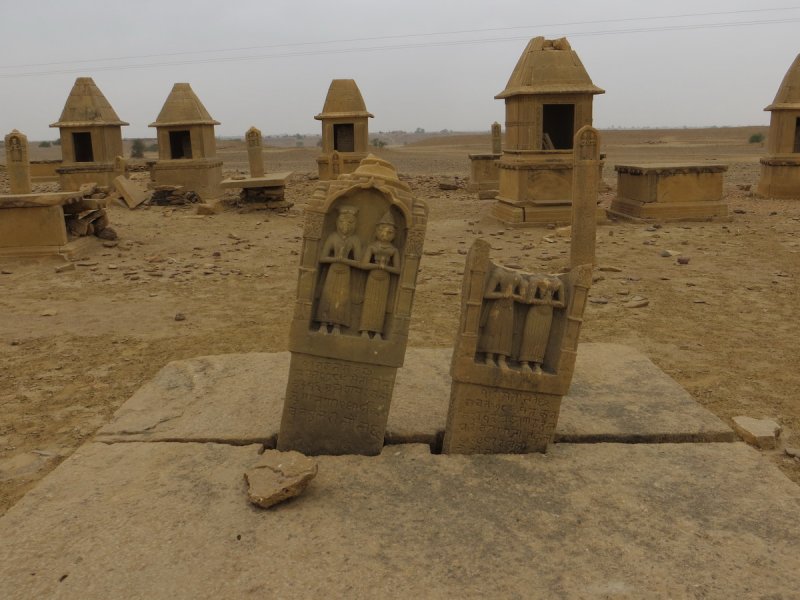 These days only ruined walls of houses and two reconstructed temples remind that in former times it was a village there.There is not too much to see in Kuldhara but, overall, I liked that place. We had a little walk around the neighborhood, and found an abandoned cemetery in the sands not far away from the village. 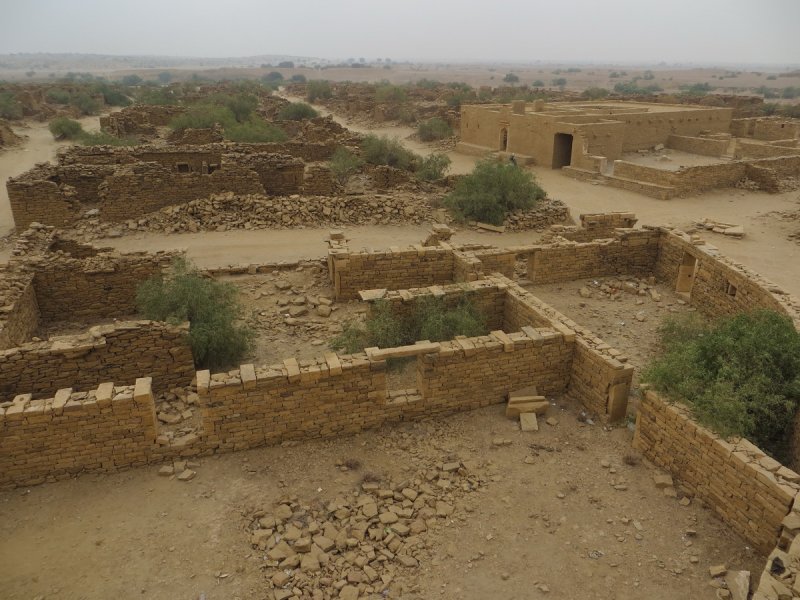 Once we enter the village crowd of boys of 10-15 years old ran to meet us. They began to teach us indian greetings, shout something on stoppage and asked for money. Unfortunately, they didn’t speak English but we guessed there were boys from neighborhood villages that are scattered around the desert. They surrounded us by a dense ring and we hardly escaped them. 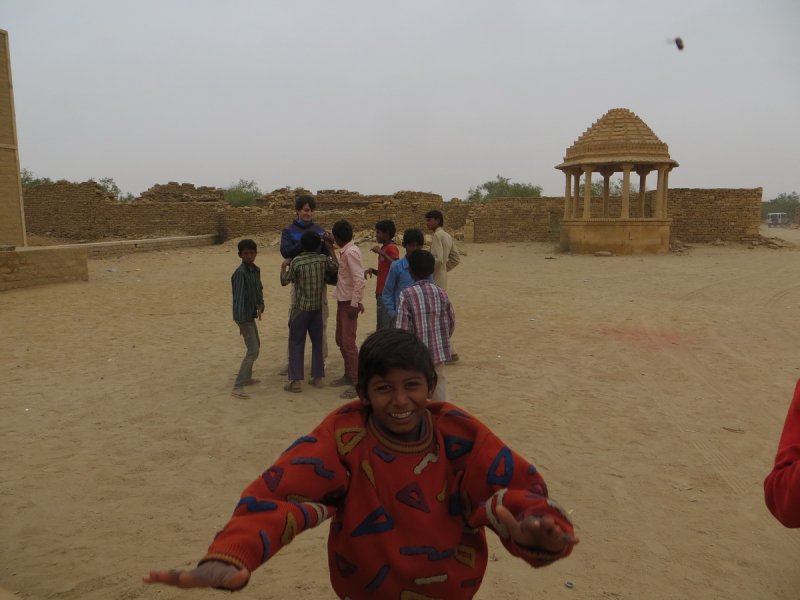 They lost interest in us rather quickly and only one boy left and showed us a temple and restored house with its kitchen and cellar. At the end of the “excursion” we gave that boy honestly earned 10 Rupee. 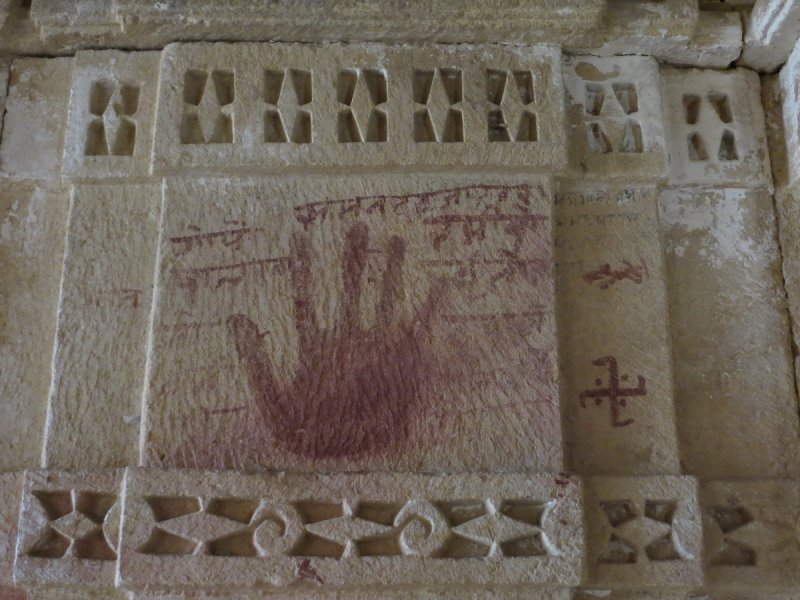 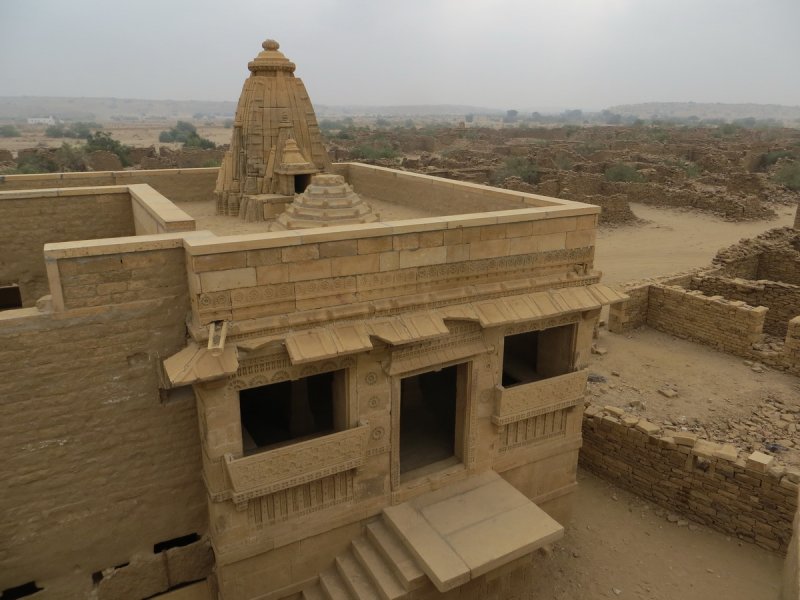 So we went on to the Sam village, that appeared to be quite crowded, so it was hard to believe that we are in the middle of the desert. There were a lot of Indian men standing here and there but no woman. 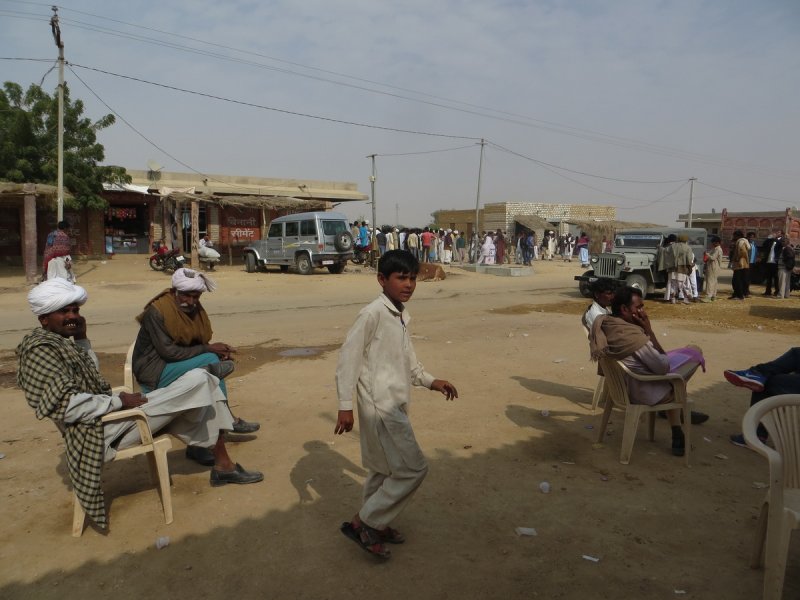 We drank a tea and as there was nothing to do, came back to Sam dunes. But before this we turned on the narrow street that led to the middle of the village where we saw houses of dwellers and their women that were working and carrying water on their heads. This is India… while men are sitting in the center of the village doing nothing, women are carrying heavy water on their heads. 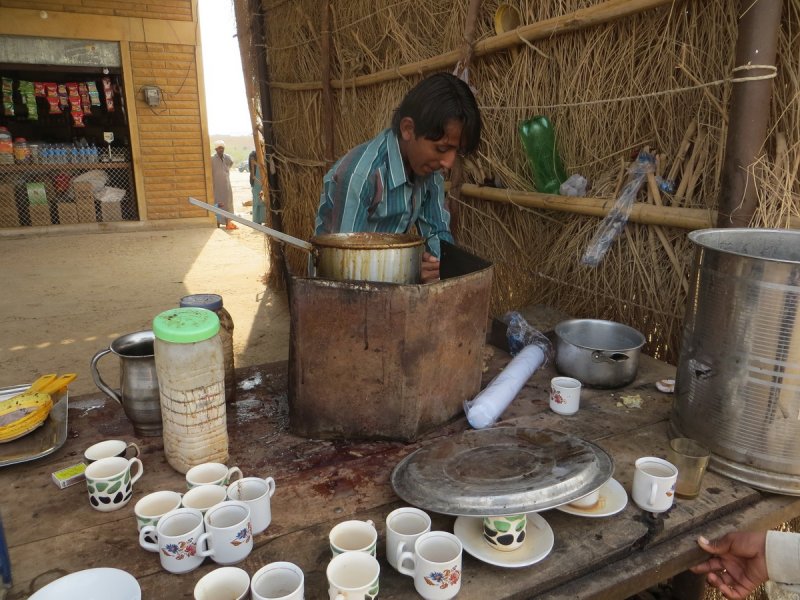 You won’t miss Sam dunes as they are visible from the road.They stretched for several kilometers and we stopped just opposite dunes to have a break and tea once again.  While we were drinking tea, owner of the tea stall was speaking to us and finally he offered us to ride a camel (it is very common situation in India when man first just chat with you, but at the end he will offer you something for sure). 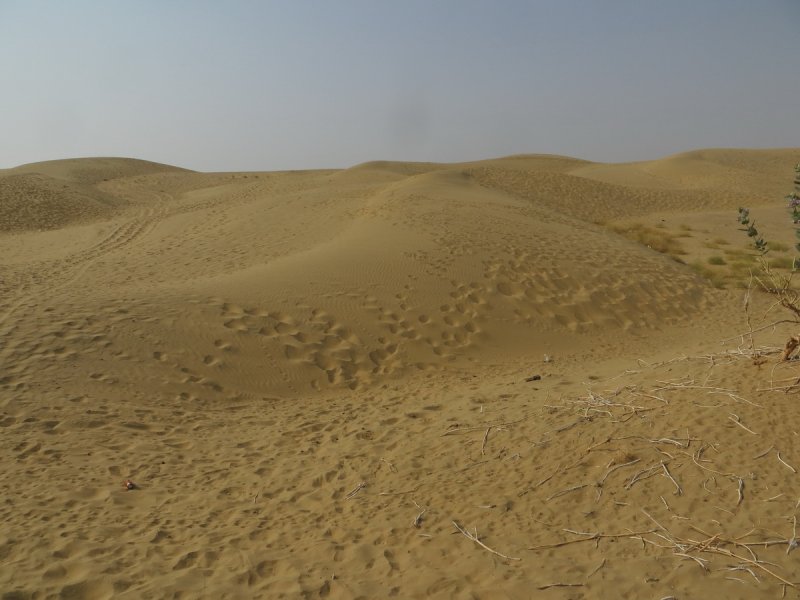 Unexpectedly, my friend agreed to  ride a camel, though in the morning he said he didn’t like riding camels and this is the last thing he would do in the desert…. On my question why he decided to ride camel so spontaneously, he explained that he simply liked this old indian man with whom we were talking while tea break… So we move towards old man’s camel that was laying across the road. Camel had a seat for two person on his back.

Old man told us we will ride 2 km for 200 Rupee (3.2 USD). We climbed on the back of the camel, old man took the rope and led the camel towards dunes. Old man  was  barefoot, with big chump on his head, he looked rather old, but when I asked him about his age, it appeared that he is only 50 years old. He told us he lived in Sam village together with his wife, 2 sons and 4 daughters. 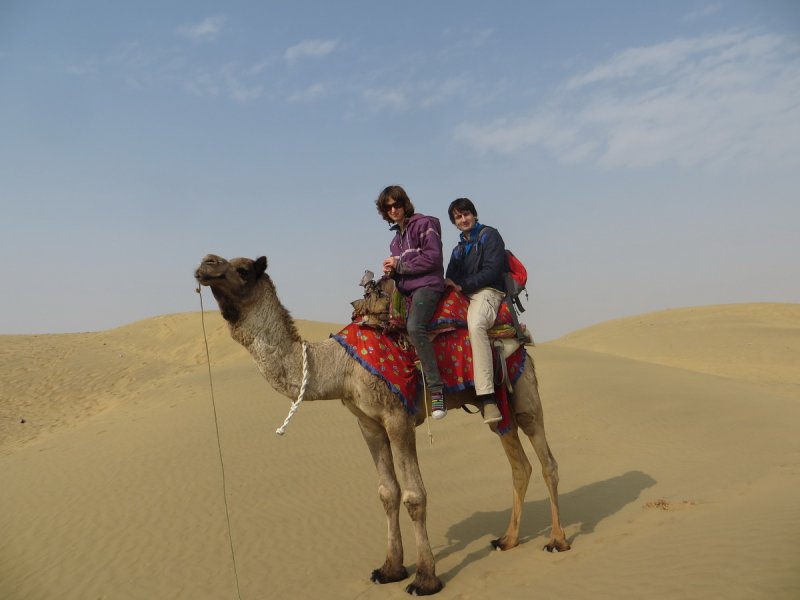 Unfortunately, Sam dunes are full of garbage, but old man told us that if go further inland for about 4 hours there will be clean, nice and more wild dunes. But anyway it is a great experience to witness a sea of sand around us for miles and miles.

We liked riding a camel. He is so tall. but move very slow and gracefully. At some point you start to move to the beat of his movements. But be ready that you will be tired after 2 hours riding, especially your ass.

Our trip was short, it takes about half an hour to make a small circle inland the dunes and come back to the road where we saddled our scooter and move towards Jaisalmer. 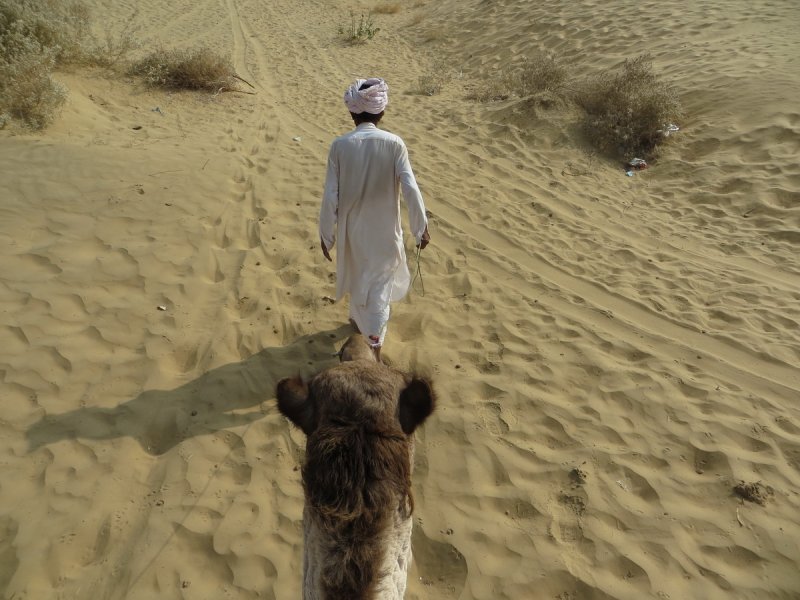 On the way home we decided to visit Bada Bagh (GPS: 26.933588, 70.809144), complex of the royal cenotaphs erected in honour of Maharajas of Jaisalmer. First cenotaph was built here in 1743 for Jai Singh II by his son Lunkaran. Later, many other cenotaphs were constructed here  to memorize local rulers, until the 1947 year, when the tradition of constructing cenotaphs was stopped. 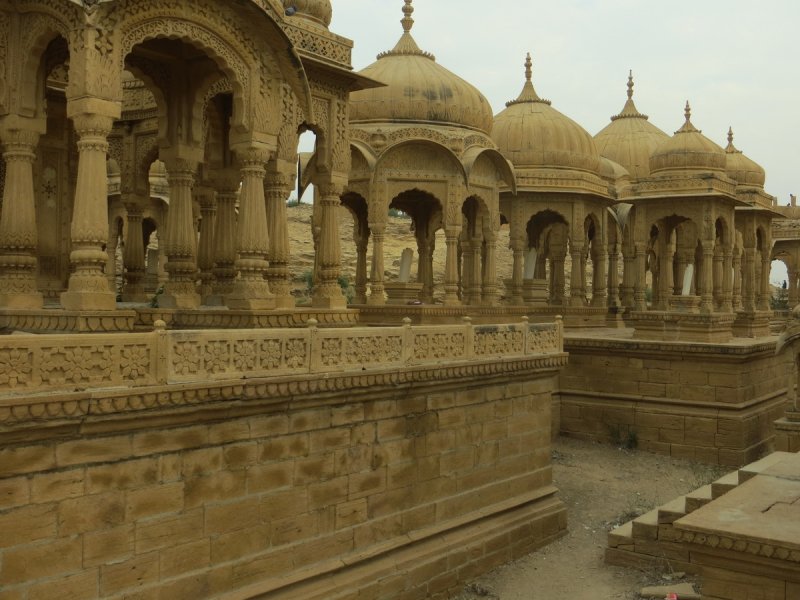 In the morning we even didn’t know about this sightseeing, situated only in 6 km from Jaisalmer, but the owner of the scooter advised us to visit this place and described how we can reach it. 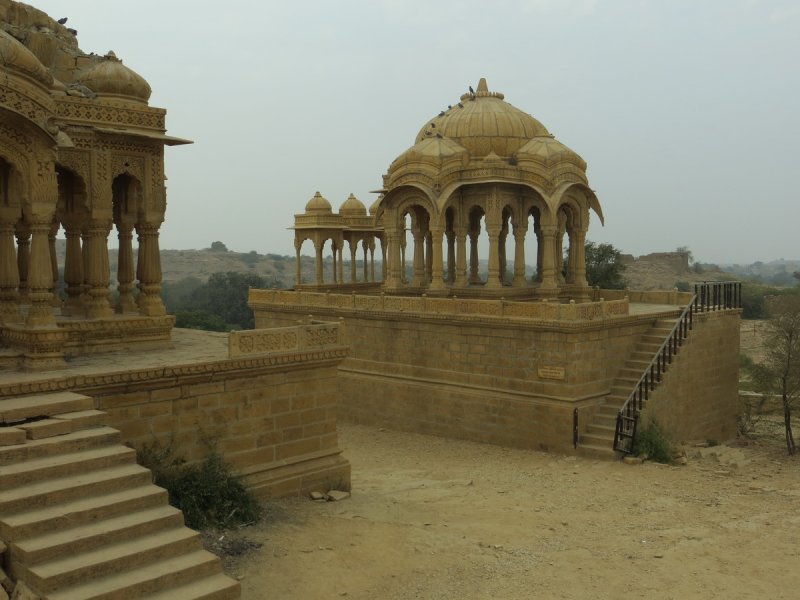 So here we are and I am totally astonished by the beauty of this “buildings”.  They impressed me much more than Thar Desert together with a camel riding. 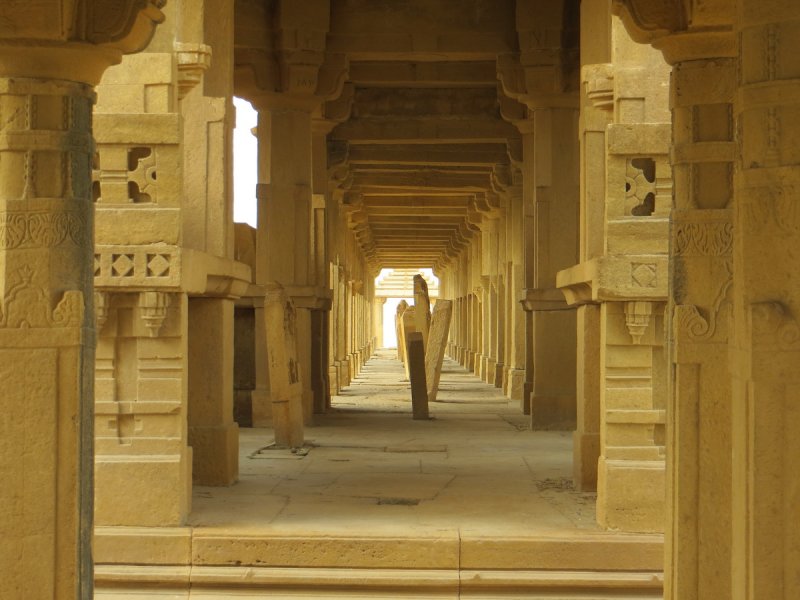 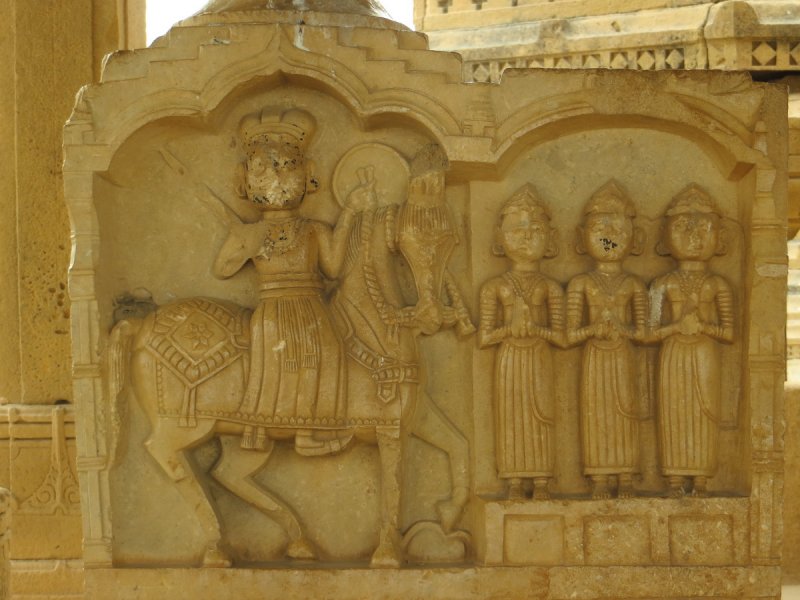 Marvelous mysterious yellow tombs with delicate carvings just in the middle of the nowhere - that is how I percepted Bada Bagh. Sun was slowly setting over the horizon, illuminating cenotaphs with soft magic light in which Bada Bagh complex looked even more enchanting. 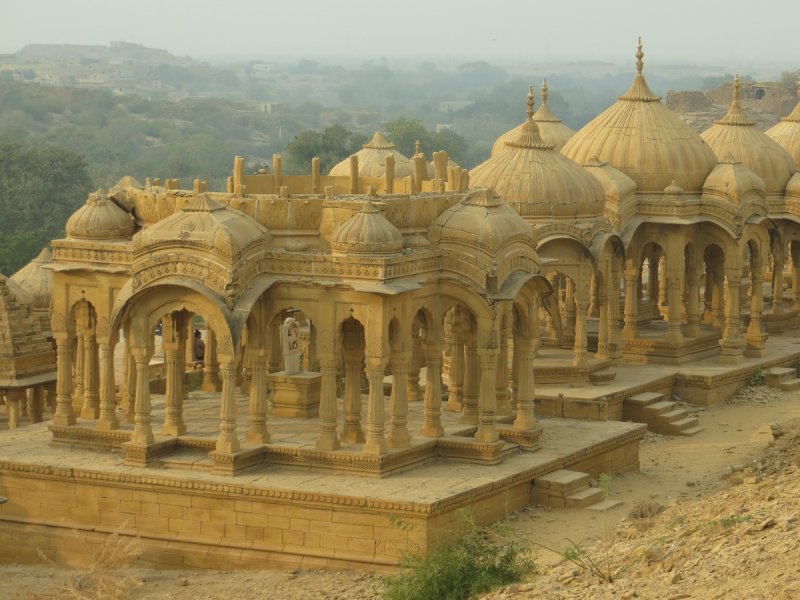 We spent about one hour just wandering around tombs, staring at the beauty of carving and marveling at amazing shapes of these buildings. Bada Bagh is not of a great popularity among tourist and so there were few visitors along with us - that is why this place is even more worth to attend  - you will meet peace and quiet here. 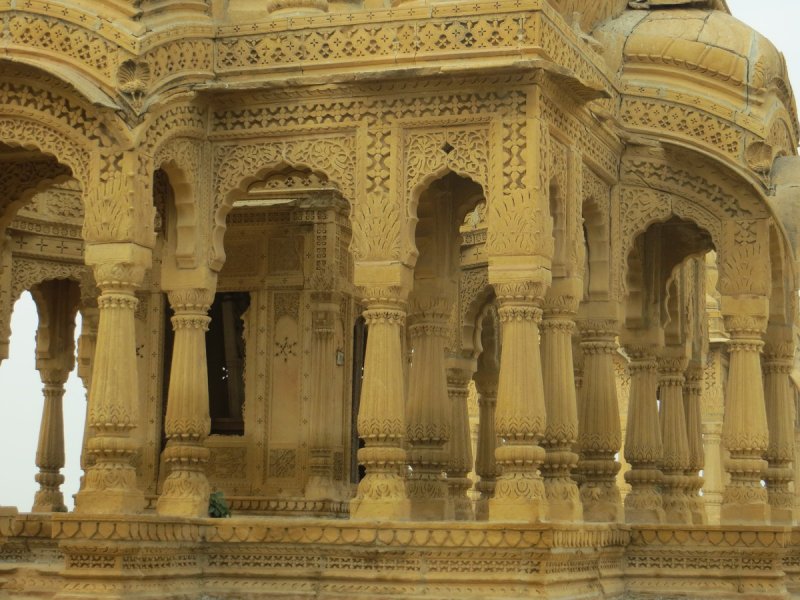 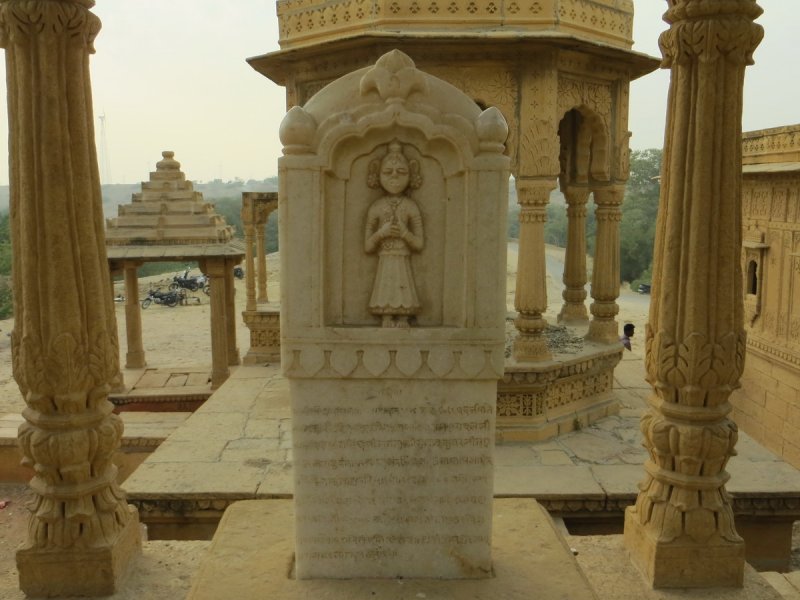 We were full of impressions, but nevertheless we decided to visit Gadsisar Lake.

Gadsisar Lake is a an artificial water reservoir built in 15th century  to supply city of Jaisalmer with water. We passed beautiful arch that decorates entrance to the lake. 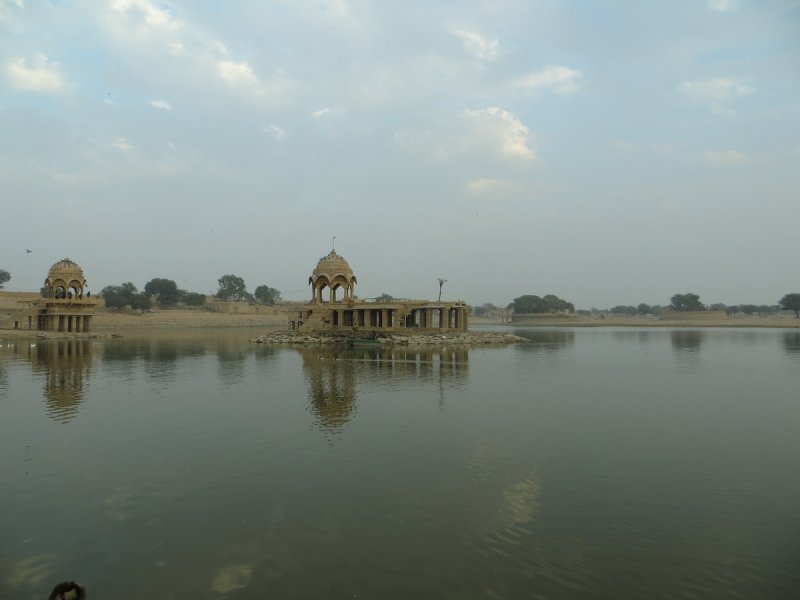 Gadsisar Lake is surrounded by temples and shrines. This place didn’t seem a touristic one  - we were the only tourist there, but many indians walked around the lake, sat on the steps and fed a huge fishes that inhabit the lake.

But it really worth visiting the lake if you have time and opportunity (you can go there by tuk tuk).

Then we went back to hotel. On the way back we wanted to buy a beer.

Beer in India
There were British who brought in beer to India, european-style beer that is made of malted barley with addition of hops. The first beer arrived to India in 1716 and that was Pale ale. But it took more than a century to establish India's own brewery, that was opened here in 1830 in the city of Kasauli by English man and traveller Edward Dyer. By the end of 19th century 12 breweries were built in India, even so British soldiers still ordered beer from England as they didn’t like local one.
Nowadays the most popular local beer is Kingfisher. Frankly speaking, we didn’t really like it. It is worse than european one, so I understand that soldiers who ordered ale from their motherland :)
You can buy beer and other alcoholic beverages only in special shops, usually called as liquor shops. In some states, as Gujarat, Manipur, Mizoram, Kerala and Nagaland it is strictly prohibited to sell and consume beer at all.

We saw liquor shop and stopped to ask for the price. A 650 ml bottle of Kingfisher costs 110 Rupee (1.8 USD) that seemed too expensive for us. We returned the scooter to the owner without any problems and he gave us back our fake passports. 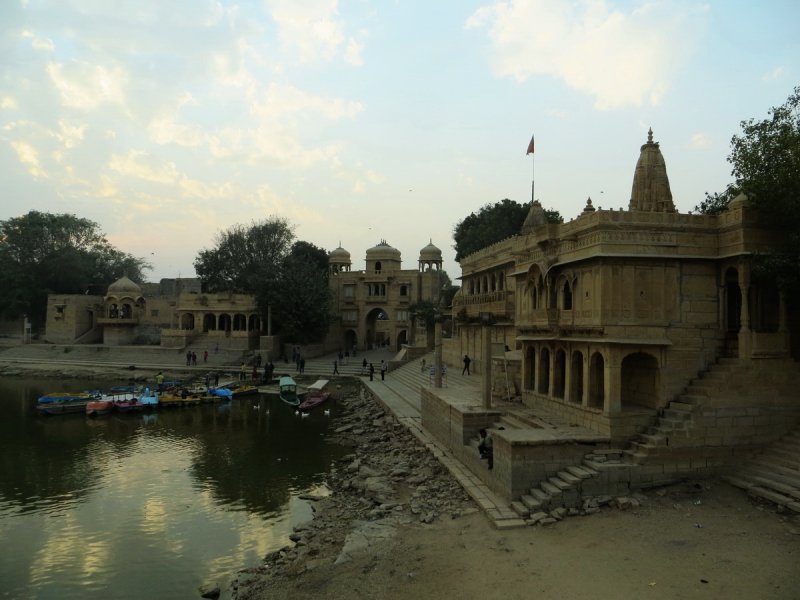 We came back home and went for a dinner to our rooftop restaurant with a breathtaking views of the fort, that became even more wonderful at night. 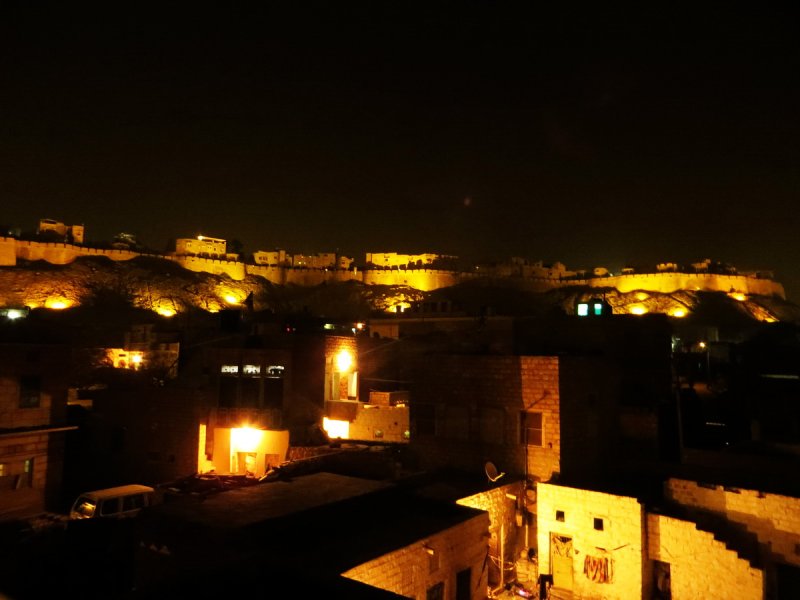